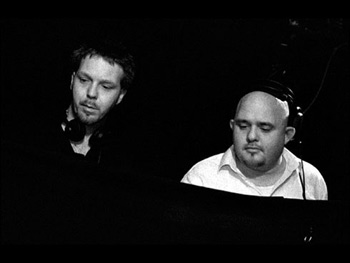 Ben Horn isn’t just one person but two: Norwegian breakbeat dj, Mikkas, and Dane Lars B, who have a long experience as a jazz dj. Together the electronic duo fuses the hard electronically produced sounds with organic textures, far away from the sterile soundscape of techno.

Ben Horn produces tunes with melodies, with the focus fixed on funk and a danceable groove, not just long ”dj-tool” workouts. On stage Mikkas and Lars B are joined by a few handpicked musicians from different genres; jazz veteran Mads Koppel on saxophone, the percussionist Lars Svane, who has a long career on the latin and world music scene, and last but not least the keyboard wiz kid Daniel Muschinsky, who has a solid background in funk and hip hop.

Ben Horns producer career started in a, for club dj´s, somewhat odd way; they composed and produced the music for the ballet ”Off the Record” for The Royal Danish Theatre in Copenhagen. A ballet that fused classical music with elements of new electronic genres, such as electronica, two-step and drum n´ bass.

Ben Horn’s record debut was the latin breakbeat single ”Stripped Down”, which was released on British label, Voodoo Recordings, in May 2002. This was a proper kickstarter and it sold out immediately, as it gained lots of good feedback from house dj´s (such as Laurent Garnier, Ben Davis, Ben Watt, Patrick Cavaliere, Chicken Lips, and Winston Hazel) and also from jazzier dj´s (for instance Mr. Scruff, Jimpster, Kruder and Dorfmeister, Coldcut, Les Gammas, Mixmaster Morris, Nik Weston, Rainer Trubi). “Stripped Down” has sported a top position on the Danish upfront chart for over 3 months and was nominated for Danish DJ Awards as ”Upfront Single of the year 2002”. After an unofficial release on Danish house label ”Lifted”, and producing the track ”Lesbianism” for Vibezone (out on Cooker Records), Ben Horn is now ready with ”Case 358”, on the E.P. ”Adventures in Aural Pleasure”(out on Jacques Laverne Records). ”Case 358” has already been well received in the English music press and was voted ”Chill out tune of the month” in ”Mix Mag”.

The duo has remixed some of the most influential Danish club hits in 2002, ”Summertime” by Wass and ”Move Your Feet” by Junior Senior. Ben Horn has signed contracts with a handful of labels and is due to release singles on ”Realler”, ”Music for Dreams”, ”Capitol” and a follow up single on ”Voodoo Recordings”, this summer. It would be an understatement to say that Ben Horn is up and coming!

Go see if Ben Horn is playing live (at benhorn.dk)